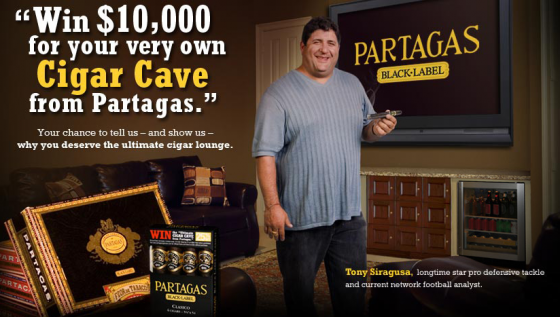 Check this out. Partagas Cigar is giving away a $10,000 “cigar cave” to be built in one winner’s house. For guys who like to smoke cigars, but are constantly relegated to a second class smoking area, the cigar cave is a godsend. What better way to spend your weekend then drinking a beer and smoking a cigar in your own cave? Anyone of legal smoking age can enter the contest by purchasing a four-pack of Partagas Black Label cigars or by visiting www.partagascigarcave.com. You’ve got some convincing to do, though. You’ll have to say why you deserve your very own cigar cave, and pictures or a video will help. Also, for a chance to win a 4-pack of Partagas Black Label:

Oh, and did I mention… former NFL tackle and host of Man Caves, Tony Siragusa is involved?