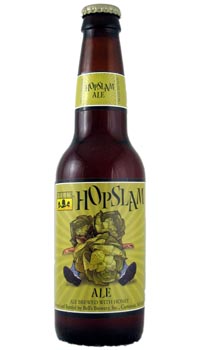 History: From the site: ‘A biting, bitter, tongue bruiser of an ale. With a name like Hopslam, what did you expect?’ and from the label: ‘Ale brewed with honey’ Vague?

For those curious, here’s the beer’s info as well:

It should come as no surprise that a beer blatantly called ‘HopSlam’ was immediately going to assail my nose with it’s exceptionally heavy, hoppy aroma. Maybe I’m not being quite specific enough: this brew is HOPPY. See? All caps. Yeah, that’s harsh. Anyway, before I get off on too big a tangent here, the pour is very nice: richly amber, a subtle nose of honey right at the back, and a little, wispy head that fades after a bit. It is indeed a very attractive beer and, since it comes from Bell’s, I’m hoping that that spells quality.

Wow. That first sip is quite the opposite of what I expected: it’s fruity, grassy, crisp, a bit peppery at the end, and, finally, nicely finished with honey. Obviously the hops are abundant, in fact, had the brew itself not been named after the very grain that permeates the mouth, I’d almost find it maybe a little too hoppy. But, as I knew what I was getting into from the onset, it’s so lovely and tasty and earthy that, despite my typical lack of a thumbs-up for overtly IPA-style beers, I find this something quite special. After a few sips it becomes evident that the flavor has such a complexity that it nearly leaves a different mouth feel after every swallow. I’m finding citrus, coriander, and various other spices along with that perfect sweetness at the completion that evens out the weighty hops just enough. It is an amazing selection from the Bell’s brewery and I feel really bad for those who can’t get their hands on it. Were you to pair it with a food, I could see it matching up with the stronger flavors of maybe a chili, a grilled selection like lamb or duck, or even a fruity dessert like a pineapple-heavy fruit salad or a cheese plate. It is just that much of a chameleon. A great choice indeed. Just be careful if you are a bit of a light-weight, that 10% alcohol could hand it to ya after two or three.

Rating: * * * *
Blanketing hoppiness aside, this is one of the most playfully complex beers I have had the pleasure of drinking in a good while.