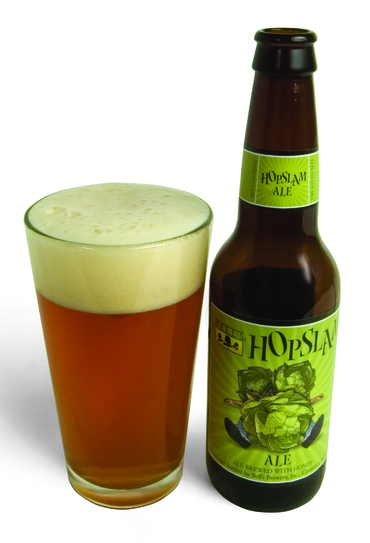 Information: Site – “Starting with six different hop varietals added to the brew kettle & culminating with a massive dry-hop addition of Simcoe hops, Bell’s Hopslam Ale possesses the most complex hopping schedule in the Bell’s repertoire. Selected specifically because of their aromatic qualities, these Pacific Northwest varieties contribute a pungent blend of grapefruit, stone fruit, and floral notes. A generous malt bill and a solid dollop of honey provide just enough body to keep the balance in check, resulting in a remarkably drinkable rendition of the Double India Pale Ale style.”

Have I mentioned just how very much I enjoy living in Kalamazoo, Michigan? I have? Well, it bears repeating, trust me. Comstock is literally ten minutes from my front door and there are few evenings more fun -or more fondly remembered- than those hanging out at the Bell’s Brewery. Their selection is superb and second to none. Sure, they might not offer hundreds of different types like Short’s, but the twenty or so they do offer are so perfected that they have become absolutely the local craft brew of choice. They have a wide variety of seasonal beers, though, and the one that marks the mid-point of winter (January 11th here) that typically carries the crowd through till the March release of Oberon is Hopslam. And it is, as the name might suggest,  slamming of hoppy goodness.

The pour is a deep golden hue with an exquisite white, frothy head. The lacing (the trail of head left behind as it not only recedes, but as you drink as well) looks like  church window. Yeah, how’s that for beauty, huh? The nose is utter splendor as well: bright and fully hoppy with hints of citrus rind such as grapefruit and orange that are very reminiscent of a hoppy IPA. There’s a bit of vanilla mixed with banana as well. It’s pretty buried, but  swirl will definitely open those smells to you, for sure.

Bitter, piney, woodsy, wet-leaves, and hay; they’re all there. Those particular flavors are primary as you inhale with your first sip. The front-most flavor is obviously the bitter, rindy bite of the hops -all six of them, for sure- and it doesn’t disappoint at all especially for those who are big IPA fans. Beneath, there are melodic hints of peaches and nectarines, along with that banana blend that seems to poke its fruity head out. If you swallow fast, without allowing some air into your mouth you really get the honey, and it’s that same honey that leads the beer into its finish with aplomb. Pair this with a chicken and Swiss Panini. Trust me… have I ever steered you wrong?