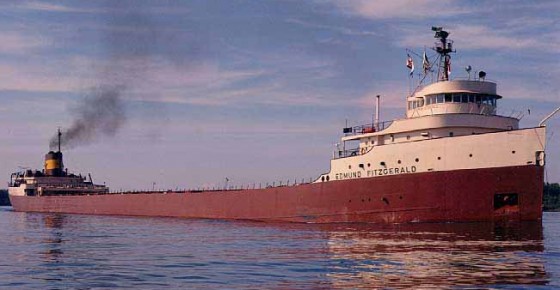 So… songs about boats, eh? Well there are quite a few of them, actually. Many of them aren’t quite as well known as others, and in some cases (I’m looking at you, The Decemberists) the band’s catalog contains more than one. Well I’ve found fifteen that really capture the mood of being in, on, or around boats and definitely give you that feeling of being, sometimes temporarily, sea-worthy. Enjoy!

15) Sailing The Seas of Cheese – Primus

Well, considering it’s Primus, and Les Claypool… who knows. But, it has a nice nautical theme and it sounds like you’re actually on the deck of some kind of bizarre boat floating on… well, cheese.

“I was laying in bed in the Ashers’ garret… I was thinking of it as a song for Ringo, which it eventually turned out to be, so I wrote it as not too rangey in the vocal, then started making a story, sort of an ancient mariner, telling the young kids where he’d lived. It was pretty much my song as I recall… I think John helped out. The lyrics got more and more obscure as it goes on, but the chorus, melody and verses are mine.”

In this particular instance, ‘Ship of Fools’ is a metaphor for a collection of people with either no direction, or just meandering through life. Poetic, don’t ya think?

The song itself is subtitled ‘Sail Away’ and makes many references to places the particular boat has sailed, including the Yellow Sea, Fiji, Peru, and Khartoum. Sadly, Enya was lost at sea never to be heard from again. Kidding.

Buffett wrote the song about Phillip Clark, at the Chart Room where Buffett first performed after his move to Key West, Florida. The song contains the bittersweet confession of a modern-day pirate as he looks back on the first 40 years of his life and ponders his future.

Again, according to Wikipedia:

The song, which peaked at #18, is about a man who sails the world following a failed love affair. During the voyage, the singer takes comfort in sailing (“We got eighty feet of waterline. / Nicely making way.”), in the beauty of the sea, and particularly in the Southern Cross, a constellation by which sailors in the Southern Hemisphere have traditionally navigated.

Guess what? Even though the lyrics are super self-explanatory, Wikipedia steps in again:

The song is sung in the persona of an impoverished fisherman off Long Island and the surrounding waters who, like many of his fellow men, is finding it increasingly hard to make ends meet and keep ownership of his boat. The fisherman sings about the depletion of the fish stocks (“I know there’s fish out there, but where God only knows”) and the environmental regulations.

Wikipedia and I are now sleeping together:

The song conveys the pleas of a captain on a troubled sea voyage and facing a mutiny from his crew. Its use of an orchestra during the long repeated refrains of the closing movement served to differentiate it from much of Grand Funk’s work. Several interpretations of the song have been given; most revolve around the Vietnam War, and “I’m Your Captain” is popular among veterans of that conflict.

The song was originally an old Folk/Mariner’s tune from the early 1900’s. It turned out that Al Jardine was a big fan of such classic ditties and thought that Brian Wilson should re-write and re-configure the song for the band. He did and the rest is history. Oh, and obviously the song carries a connotation of a bad acid trip, just in case you were wondering.

Though there is no actual story behind the nautical themes of the song, it’s said that Dennis DeYoung was pretty depressed when, after Lady, the band’s next few attempts failed to chart as high. So, there is a somber, regretful overtone to the song. Also Cartman likes it. A lot.

This time, literally, the entire story is right there in Collin Melloy’s lyrics. Just listen.

It’s about a struggling Vietnamese hamburger stand on the outskirts of Moose Jaw, Canada. Just kidding. It’s about sailing.

3) Beyond the Sea – Bobby Darin

Original writer, Charles Trenet’s French version was a homage and ode to the changing moods of the sea, while lyricist Jack Lawrence, by just adding one word “Beyond” to the title, gave him the start whereby he made the song into one of a dear lover mourning for a lost love, boyfriend/girlfriend, or beloved sweetheart. Thanks, Wikipedia!

Quite possibly one of the most depressing, morose, dark songs in history about a shipwreck. The boat sunk on November 10, 1975 and claimed the lives of all 29 aboard below the chilling waters of Lake Superior. If this song doesn’t give you the chills, you need to check your humanity at the door.