There’s something magical about the symbiosis at work in James Mangold’s Ford v Ferrari, an all-encompassing treatise on work ethic, corporate politics, family drama, car racing, and purpose. All of these push and pull at us throughout the film’s duration, but none of them takes specific precedence over the other. Mangold’s matter-of-fact style – so prevalent in films like Identity, Cop Land, and Logan – lends itself easily to this story, which is already full of its own fireworks thanks to superb talent in front of and behind the camera. 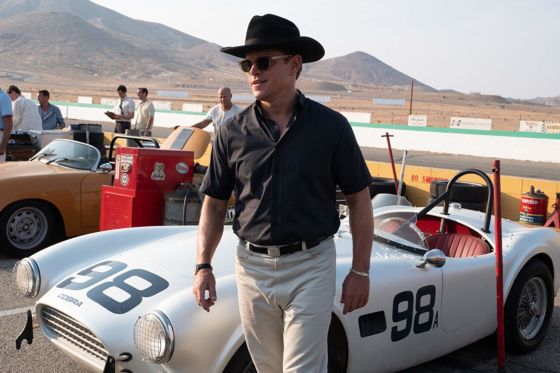 This isn’t only about proving American superiority on the race track; this is a film about positioning the right people in the best place for success. Carroll Shelby (Matt Damon) has been tasked by Henry Ford II (Tracy Letts) to build a race car capable of beating Enzo Ferrari’s team at the 1966 24 Hours of Le Mans, something no one has done for the six years prior. Shelby’s proven success as a car maker and a former racer (he won the ’59 Le Mans) gives him the advantage, but there’s one thing missing: a racer who knows what he’s doing. 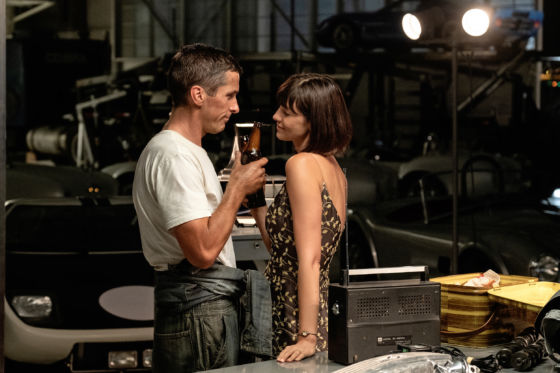 Enter Ken Miles (Christian Bale), a race driver and mechanic whose instincts and expertise more than meet the criteria. His abrasive demeanor and superiority complex, however, don’t exactly endear him to the decision-makers in charge of Shelby’s endeavor. But here’s the thing: he’s more often than not correct. He knows how to get it done, but it’s not the way the Ford suits – especially Leo Beebe (Josh Lucas) – want it done. Shelby needs him on his team, even going so far as to leverage his own car company for a shot at allowing Miles to prove to Ford that he can win. 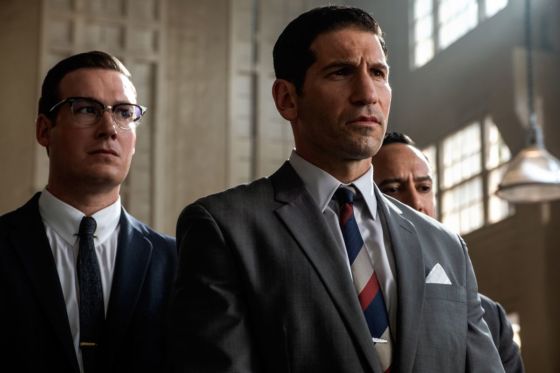 Ford v Ferrari seems carved out of fresh material. It’s not a throwback movie with older filming techniques and lighting, nor is it a modern-day roadster movie. We’ve all seen many stories like this before, where the underdog has to rise to the occasion with a sensei of sorts backing him up; most of these are cheesy Saturday afternoon movies we forget about almost as soon as the credits start rolling. However, Mangold defies this convention by not treating the film like a typical underdog story. Instead, he shows a more grounded, real, rough-and-tumble beginning to Shelby and Miles’ partnership which takes us through to their final moments onscreen together. 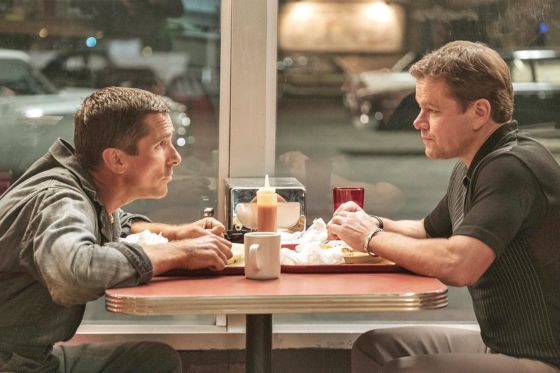 It’s a grounding which this film carries in each frame and each word. There’s little in the way of superficiality or corniness, and that has to do with purpose. Each character does what they’ve been put on this earth to do; there are no heartwarming “You’re a good friend” moments, sudden “I’m gonna change!” heel-turns (except for one which comes at a steep price), or backflips. As written by Jez Butterworth, John-Henry Butterworth, and Jason Keller, this may be the most single-minded, laser-focused script to come along in years, as not one character deviates from their established personas. Heroes at the start will remain heroes, while villains remain villains. (Not even the Star Wars films can claim that.) 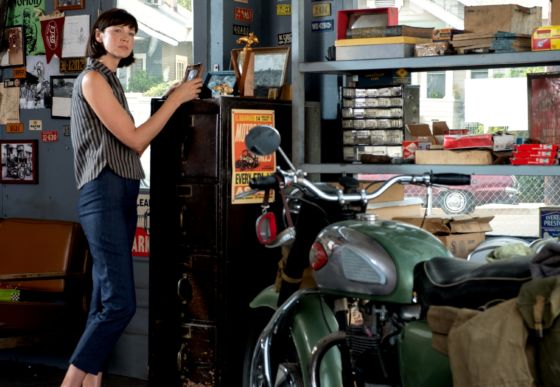 As the film’s core duo, Bale and Damon play off each other like fire and ice, respectively. While Damon exudes the confidence and cool of someone who knows his products and actions speak for themselves, Bale portrays Miles as a hothead, driven only to succeed at any cost, no matter who pisses him off. He’s an M-80 of a man, opinionated and forthright, which gets him into trouble right away with the Ford brass, but he knows he’s right (when it comes to cars, anyway). He also knows when to turn off his excitement-fueled bluster at appropriate moments, especially around his wife Mollie (Caitriona Balfe), who won’t stand for a minute of his antics. Balfe cuts a stark figure as Miles’ emotional center, given only a few appearances but lending a weight which shadows Miles throughout. She makes a fight scene between Shelby and Miles unforgettable by simply pulling out a lawn chair and watching; she also knows how to speak to Miles, something no one else seems to be capable of doing. 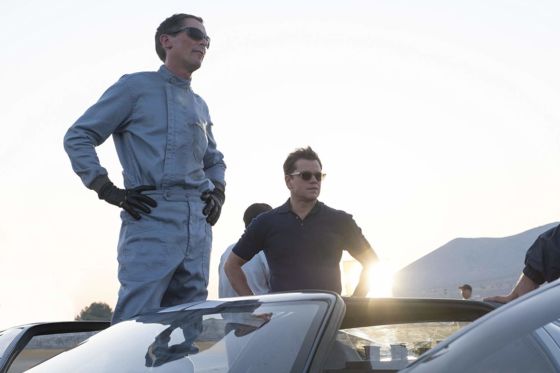 The filmmaking is quite simply extraordinary. Mangold doesn’t bother with the sweeping grandeur of crane shots or, conversely, handheld shakycam. Instead, most of the film is kept at eye level and shown through cinematographer Phedon Papamichael’s long takes, keeping us in the scene and asking us to be with the characters rather than merely observe. Action is thrillingly choreographed by Robert Nagle, featuring impressive stunt work and racing scenes which leave you breathless. All of it is impeccably edited by Michael McCusker and Andrew Buckland, staying respective of geographical positioning and adding carefully-measured excitement to hairpin turns. Driver’s seat sequences show each meticulous, calculated decision in the driver’s seat to push the redline or to sit back, involving us in the danger of each race with glimpses out of the windshield of racetrack hazards and harrowing disasters. 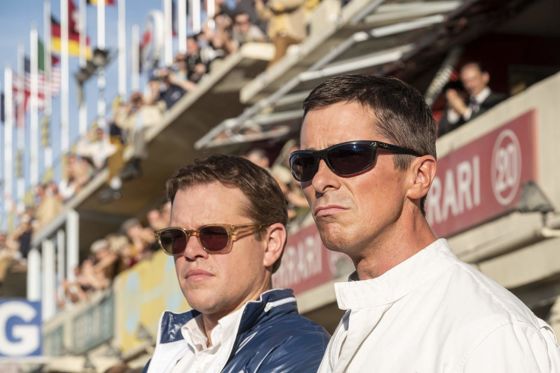 Ford v Ferrari is its own machine, tightened and tuned to perfection and bearing a distinctive voice and tone. Mangold goes to impressive lengths to make this film timeless, not dated by technology or technique; instead, he keeps Shelby and Miles’ fight to be best at the forefront, dispensing with frippery and the unnecessary. There’s an outstanding balance between action and the more personal which gives us the chance to firmly plant ourselves alongside these characters, making us cheer for them as they race arm-in-arm toward the finish line.

Ford v Ferrari is available on Digital now and on 4K, Blu-ray and DVD February 11th. 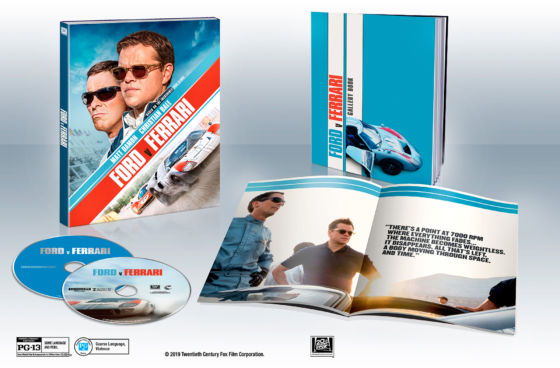