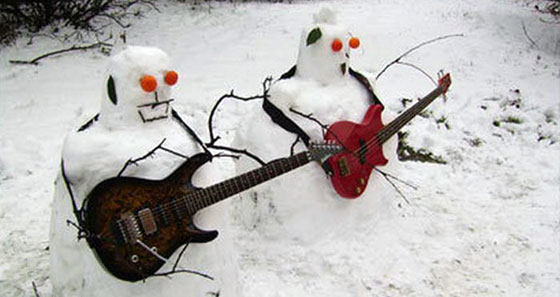 So, have you noticed how damn frigid it is outside lately? Yeah, well, according to those weather folks who spend their days following clouds and predicting El Ninos, apparently the vast majority of the US is experiencing another Polar Vortex. Sure, it might sound like some kind of robot from Pacific Rim, but as it turns out it’s a pretty real, and pretty dangerous, area of wickedly cold weather scooting down ever-so-angrily from the Arctic where weather like this is born and bred. Neat, right? Yeah, not so much.

So let’s assume that you’re hunkered down in your house for the duration and you want to build a Play-List of music that reminds you of what’s going down outside… for some reason. Well, you could do worse than these ten songs about Cold, Ice, and Snow. Enjoy!

Just try to deny this isn’t a masterpiece of the 90’s. You can’t, can you? If this song wasn’t and isn’t stuck in your head forever, I weep for your past.

Yes, I cheated. The song has nothing to do with snow or cold. Or stones for that matter. It is, however, classic Queen and one of the fastest rock songs of all time.

You’re willing to sacrifice our love and you know it.

From Ride the Lightning, back when Metallica was actually a metal band and not a bunch of… crap.

Yes, I know The Bangles redid it. And I don’t care. Paul and Art did a far superior job. Because I said so.

Do you really need a reason?

Just try not to weep openly during this song. I dare you!

3) Ridin’ the Storm Out – REO Speedwagon

This song has an Air Raid Siren in it. What more do you really need?

This song is cold! And by cold I mean hot. See what I did there?

It’s a song about standing on the ice and literally getting into a fight with your own reflection. Trust me, in these temperatures, anything is possible.