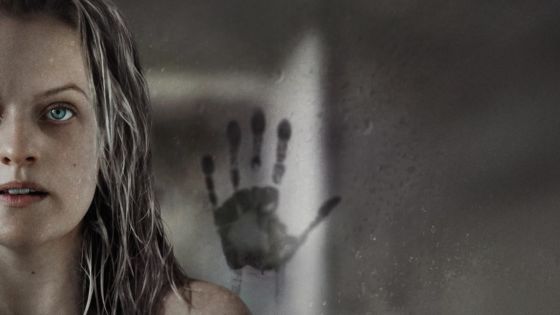 Universal Pictures’ decision to repurpose their Dark Universe franchise into standalone films has unexpectedly yielded a modern-day masterpiece. Restrained in its superficial tendencies but compounding wave after wave of tension and suspense, writer/director Leigh Whannell uncorks a new kind of terror with The Invisible Man, inspired by H.G. Wells’ science-fiction 1897 literary classic. The mad scientist and his obsession with optics still occupy the same space, but with an entirely different story behind and in front of it. 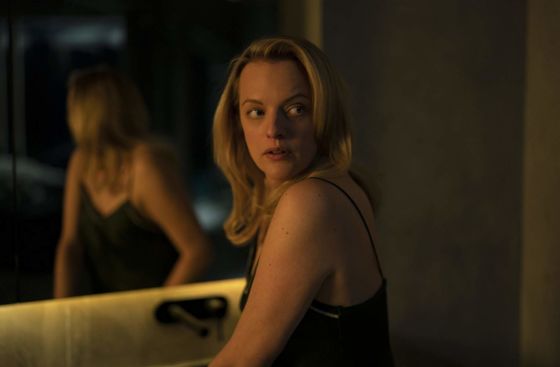 Whannell has grown immeasurably as a storyteller, being able to slam both his horror and action talents into a unique space where each frame is wrought with nerve-racking peril, paced to perfection and paying off explosively. Although his directorial debut (Insidious: Chapter 3) might have been a little shaky, he beat the sophomore jinx with a top-notch action film (Upgrade); The Invisible Man finds him at his best, an out-of-nowhere thriller capable of causing sweat stains on its audience’s shirts. (Author’s note: I am speaking from honest-to-gosh experience.) 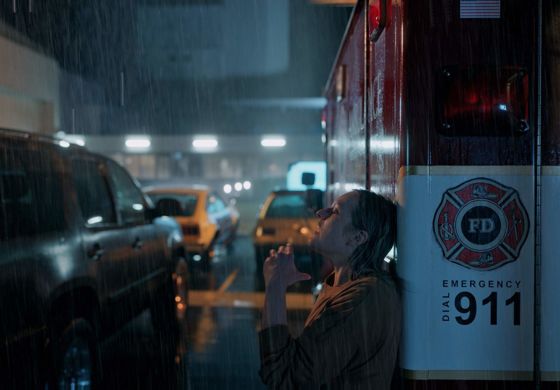 The opening follows Cecilia Kass (Elisabeth Moss) as she makes a timid escape from an expansive seaside estate, a little reminiscent of Julia Roberts in Sleeping With The Enemy – only, y’know, this time, better. This sequence sets the agonizing, unforgiving, and brutal tone for what follows, plying us with long takes and silence for this entire prologue. Our hackles are up and quivering at how Cecilia makes her way through this structure, collecting her hidden go-bag and having to disarm the security system without Adrian (Oliver Jackson-Cohen) waking up. 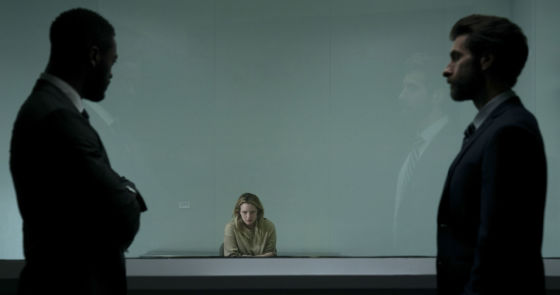 Devastatingly, Whannell keeps coming like a hydraulic press, fully intent on flattening us with atmosphere and fright. He doesn’t let up, not for one second, from the opening titles straight through to the credit roll. Wells’ story of a man with an invisibility problem still resounds through this new reimagining; in this iteration, we’re removed from a simple revenge plot and given new motivations sure to strike a chord with the audience. With Adrian stepping in for the novel’s Griffin (and sharing the same last name), the insanity takes on a newer, sadly familiar form: the gaslighting, victim-blaming, over-entitled, abusive male who thinks women are his to do with as he pleases. And Cecilia has had enough.

Some weeks after her sister Emily (Harriet Dyer) whisks her away to their friend James’ (Aldis Hodge) house, word comes of Adrian’s suicide in the form of a lawyer’s letter, said lawyer being Adrian’s brother Tom (Michael Dorman). In executing Adrian’s will, he’s instructed to leave Cecilia five million dollars, dependent upon her never being charged with a crime. Even in death, Adrian exerts control over Cecilia; through this demand he attaches himself as a perpetual specter, thus making plain the correlation to the scars abuse victims are made to wear. But when the vapor from a breath in cold air appears from an unseen mouth behind Cecilia as she stands near her front door, we wonder if the word “specter” has jumped from the figurative into the literal by breathing down her neck. 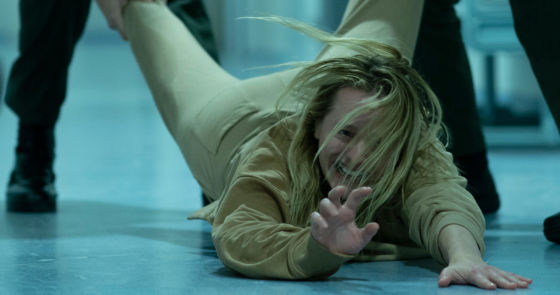 Moss gives a pitched and dynamic realization of a woman slowly suffocated and deranged by the invisible Adrian as he engages in all manner of torture. Everyone in her life now faces his wrath as he engages in catastrophic physical and mental attacks, from sending a damaging email purporting to be from her to dragging a knife across an unlucky victim’s throat. As he’s invisible, the blame falls square on Cecilia, with each subsequent trespass upon her life intensifying and rising in cost from one to the next. 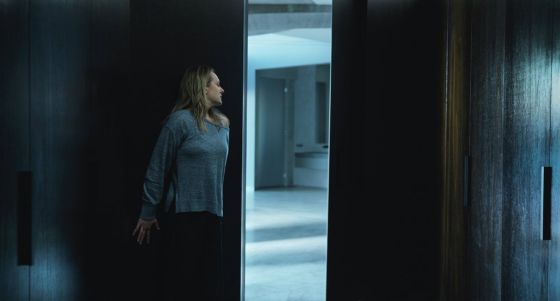 The Invisible Man rides without fail on Moss’ gifted shoulders, having to excruciatingly crumble from PTSD and fresh assaults onscreen for almost 98% of the film’s duration, making us feel and believe every minute of Cecilia’s transformation. Her fight isn’t just to save her life and those of the people she loves; it’s for her soul’s very freedom, and this drives Moss’ passionate performance with a relentless strength. She elevates this movie past its horror trappings into palpable realism, her battles with her ghost bearing similar weight in both action and metaphor. 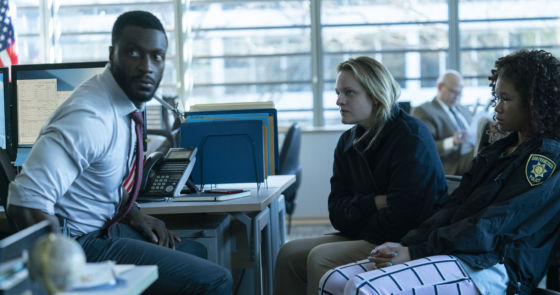 Cinematographer Stefan Duscio immerses us in Cecilia’s surroundings by making us feel as she does – like she’s in hell no matter where she goes. Whether it’s a wide-open mansion, a tight suburban rambler-style house, a busy restaurant, or the confines of a prison cell, Ducsio adds a smothering discomfort by casting us around the spaces in which Adrian could be lurking. A hallway, the corner of a room, a foreboding attic, and any other signs of emptiness are given meaningful, gleefully ominous pans and shot with wide angles, thus making Cecilia minuscule against her surroundings. Best of all, editor Andy Canny – living up to his surname –  gently and cruelly preserves Ducsio’s long takes by making sure to not disturb the mood with overediting. 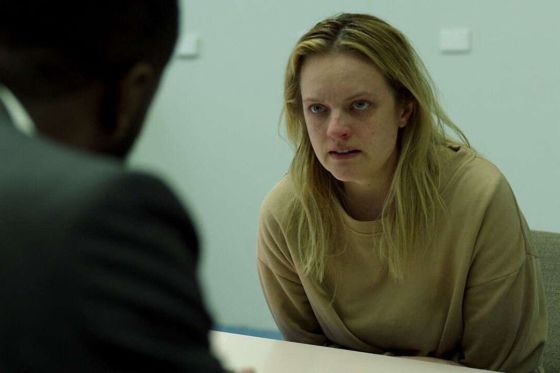 Adding another thick layer of pressure is Benjamin Wallfisch’s superb score, which bounces between more traditional instrumental arrangements associated with films of this genre and cacophonous, rhythmic blasts of electronic distortion. The latter provides a modernity which both seats us in the present – a definite clash with its more timeless visual construction, but not unwelcome – and jolts us with another attack on our senses. What’s happening onscreen is more than enough to lock us in, but Wallfisch’s judgment between simply supporting the scene and coldcocking us with his own musical character is sound. 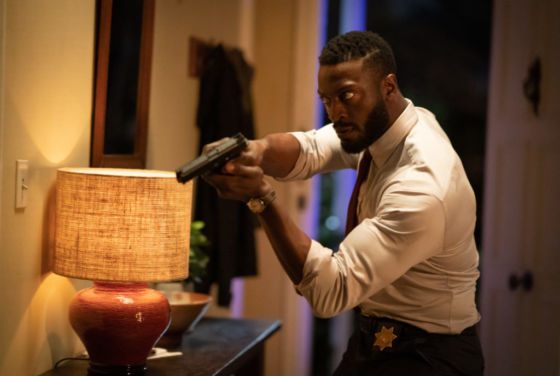 These artists all seem to follow Whannell’s beautiful, perfect insistence on not going to extremes with his material. Foul language is kept to a minimum in favor of more consequential dialogue; computer enhancement is dialed back to make room for more tangible physical effects; and he opts to portray violence with what Ducsio’s camera captures in the instant, not with obvious, forced gore close-ups. This restraint is unexpected in today’s R-rated films, where filmmakers often pile on the carnage, throwing us into the realm of disgust and disbelief to up a film’s shock value. Running contrary to this trend, Whannell’s choice to eschew overplayed theatrics and excessive blood makes this impossible scenario seem more possible and vivid. He does pick spots to shatter us with the consequences of a knife to the throat, but they carry with them the symbolism of taking away one’s voice, not content to merely be a kill for a kill’s sake. 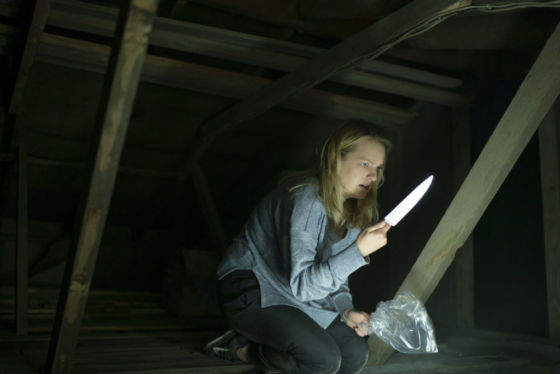 The result of this combined effort in front of and behind the camera? A straight-up adrenaline rush which leaves you gasping for breath. People forget that Whannell’s franchise-starting Saw script also rode on high tension levels and relatively minimal gore; the squick-filled sequels (including the two he penned) upended the original’s recipe, destroying its good name. Thankfully, he brings that spark to The Invisible Man with a more focused, practiced hand and the experience to back it up. Some might pass it off as a mix of the aforementioned Sleeping With The Enemy and Paranormal Activity, but Whannell’s muscle-clenching, teeth-grinding exercise in anxiety and fear is so much more than that. The cast and crew of The Invisible Man strike as one, a well-built and operating juggernaut with the single-minded purpose of battering us senseless with one of the year’s best films.

Universal Pictures' decision to repurpose their Dark Universe films into standalone stories has unexpectedly yielded a modern-day masterpiece with The Invisible Man.