The Most Bizarre Sports Video Games 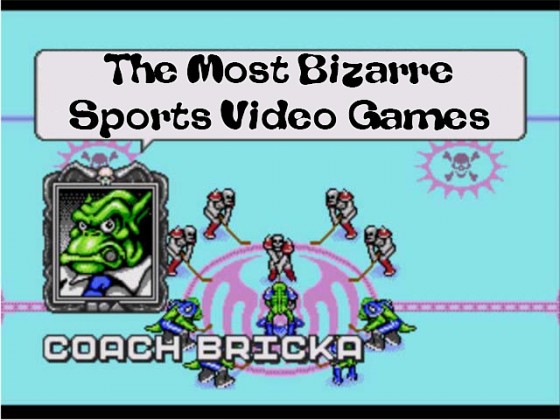 We here at Gunaxin love us some video games. No, it has nothing to do with the vast majority of us being male, or the vast majority of us being single (present company excluded on the latter), but it does have to do with the fact that we’re complete and total geeks. But, it seems that the good folks at this site appreciate a good sports video game over any other genre. Case in point, these two articles you really ought to check out: The Complete History of NHL Video Games and The Top Ten Baseball Video Games. Anyway, while compiling lists like these, we’ve come across some of the oddest attempts at making the standard Baseball, Football, and Hockey games seem fresh and/or incredibly silly. So grab your old Nintento, pull up a Power Chair, and get ready to check out some Bizarre Sports Video Games!

Ya want blood? How about severed heads and separated limbs? No problem. Sure, this game felt a little like football, and back in 1993 when it was released, it was a nice change of pace from the standard. And ya know what? It was pretty damn fun. Basically, if you can’t get to the ball, eviscerate the opponents any way possible.

It’s the future, 2072, and apparently humans have been either enslaved or obliterated. Either way, sports are still a huge draw even (or especially) if the combatants are robotic. Oh, and did we mention that the ball is a THERMAL DETONATOR! Yeah, that’s right, bitches. If you don’t diffuse this thing by crossing the 50-yard line… Ka-Boom! Other than that, the plays were pretty much the same… in the FUTURE!

Okay, now we’re talkin’! Mutants, zombies, aliens, scorched Earth… Mutant League Football had it all! From ref bribery to land mines to toxic waste, the levels of exact football rules were definitely lowered dramatically. And man was it fun! Oh, an in case I didn’t mention, successfully winning the championship game in season mode results in the losing team exploding spontaneously. Awesome.

Who hasn’t wanted to watch vehicular androids knock a few dingers around the ball diamond while they beat the shit out of each other (the robots, not the spectators)? Well you can, and you can actually play it, too! Base Wars is very similar to Cyberball in terms of it’s futuristic game play with standard baseball rules, but with brutality. Oh, and robots.

More robots? Yep. It’s 2020 and the heavy hitters of baseball have taken on cyber-characteristics and now play the game in something called The Cyber Egg Stadium. What? You got it. Oh, you wanna hit home runs over the wall? Nope. See, this stadium is surrounded with some kind of glass partition and the ball just deflects back into play! And hey, let’s not forget land mines!

It seems to me that if you really want to weird-up your sports game, all you need to do is add an inordinate amount of brawling. Or, in the case of basketball: add brawling. In fact, the entire basis behind Basketbrawl is to win by either scoring the highest number of points, or just plain laying out the opposition. Now that seems fun.

We all know that a mix between Disney and decent video games can create some really awesome amalgams (see: Kingdom Hearts). However, just because it has Disney on it and in it doesn’t necessarily guarantee a hit. Case in point: Disney Sports Basketball for the Nintendo Game Cube. According to GameSpot, “Disney Sports Basketball has no redeeming qualities, and it should be avoided by basketball fans and Disney fans alike.” I have actually played this and I want that fifteen minutes of my life back.

Everyone knows that rappers are also damn good basketball players, right? Good enough to star in their own video game that features such lit-spitting notables as House of Pain, Onyx, and Flavor Flav? Hello? Anyone? Exactly. This game was deplorable. It takes place on the ‘urban’ court featuring ‘fisticuffs’. Of course it does.

You’ve seen the smash hit film featuring Bugs Bunny, Daffy Duck, Michael Jordan, and Bill Murray, now you can pretend you’re them and play the movie! Well, sort of. This game’s controls were about as useful as a broke dick. You could either be the Tunesquad or the Monsters, or just turn it off.

Fans of ATHF will really dig this almost golf game, while others will likely fail to recognize its appeal. And it’s people like them who ruin everything for the rest of us! Ahem. Sorry. Uh… this game features golfing where, at the hole, you need to battle bosses before you can putt. Yes sir.

I’m going to let Wikipedia take over for this one. “The objective is to earn the most points possible by landing the frog in the course’s hole in the quickest time possible. Players can also earn points by sending their frogs through various spheres scattered through the level. In addition, they can score points by having their frogs eaten by giant worms, or by having their frogs swim, or by any number of other things.” Right. Now you see why.

Get ready for some three-on-three hockey where rules are for pansies and attempting to check the shit out of your opponent is the name of the game. Well, that and scoring but come on, every hockey game features scoring. Let’s get hittin’!

When you already offer a sport that incorporates fighting as one of its standard rules, you really need to go all out for a more unusual version of it. Bring on NHL Rock the Rink. This hockey game gives you everything: fights, brutality, flaming nets… in other words, lots of fun.

“Let’s form teams from robots, skeletons, and trolls!” That guy was on drugs. Drugs I want because this game was awesome! Possibly one of the most fun, bizarre sports video games of all time. Featuring such awesome additions as exploding demon goalies, crowd-thrown power-ups, corpses strewn about the ice, and deadly pucks, MLH quickly becomes something that would be hours of fun to watch in real life. Demon goalies? I’m getting the popcorn.