Media > Movies > Whites Don’t Get ‘Do the Right Thing’

Whites Don’t Get ‘Do the Right Thing’ 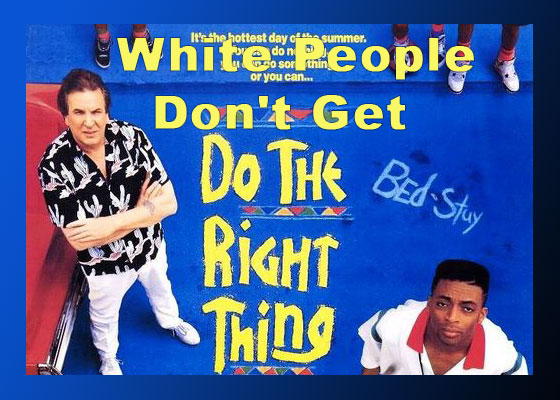 Spike Lee’s 1989 film Do the Right Thing is currently No. 96 on The American Film Institute’s “100 Years…100 Movies.” The film, about life on a summer day in and around a pizzeria in Brooklyn, is widely praised by critics and even taught in film classes, though the controversy it caused is well noted.

Let me make this clear, even if it is 21 years later: White people don’t, won’t, can’t, and never will get this film. Why? Mookie (Lee) throws the trashcan through his boss’s window. Also, it ends with contradictory quotes, one advocating non-violence and the other advocating violent self-defense in response to oppression. Mookie tells his boss, Sal, to “[email protected]#% a window. Radio Raheem is dead.”

Lee states that only white viewers ask him about this part of the film (so I suppose the non-whites must ‘get it’). Yet, the AFI, which I’m sure is made up of more white people than anyone else, honors the film though they are more likely to ask Lee ‘why?’ thus not ‘getting it.’

The combination of Mookie throwing a trashcan through his boss’s window, Lee’s justification of it, and the AFI and college professors praising the film, is absurd. The very same white people who praise this film are also scratching their head wondering, “Why did Mookie throw the trashcan?”

[email protected]#% you, Spike Lee, you racist idiot, not just for your lousy films, but for fooling some white people into praising your ‘artistry’ though they haven’t a clue what you’re trying to say.

If you haven’t seen it, don’t. Instead watch a good film made by a black director, Boyz in the Hood. But if you want a true taste of the drivel that Spike Lee unleashed in theaters and earned praise for, try to get through this: (very NSFW)